So a ways back I got an e-mail from a great collector overseas that I had bought some rare Down to Nothing records from before. He was looking to sell the rest of his DTN collection. There were three 7"s he had that I still needed. So after a bunch of e-mails back and forth with logistics we worked out a deal, and they were on their way. 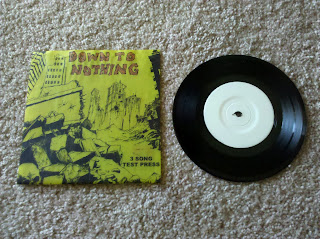 So the first of three was this test press of the self-titled three song release. So apparently Robby Redcheeks made his test presses very limited, only five of these exist. 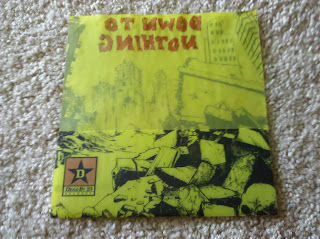 So this one has a pretty cool transparent yellow sleeve of the original artwork. The usual quality you'd expect from Dead by 23. One the back you can also see a great Revelation Records rip off logo. 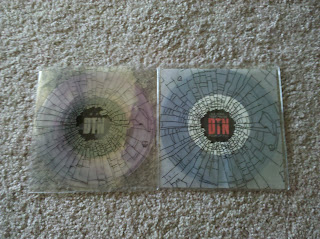 Here are the other two of the three 7"s. These are both copies of the six song self titled 7". The 6 song 7" was ditched for some reason, I'm not sure why, recording? song selection? who knows. Either way it gave a great opportunity to put out a super rare release, all together only 55 copies, including tests. So on the left is this release on pink vinyl out of only 16. Then on the right is the test press out of five again. This seems to be a trend. Robby made another cool sleeve for this one, with some little differences but good ones. It even says on the front that mine is number four of five.

All together these are some of the best DTN records I have. They're incredibly rare and hard to find, and also some of the best material from this band. Not to mention Dead by 23 did a great job with them. They also complete my collection of both releases. Now I'm sure furhtur down the road I will try and get my hands on some more versions of the three song release transitions.
at 5:46 PM 1 comment:

Email ThisBlogThis!Share to TwitterShare to FacebookShare to Pinterest
Labels: Dead by 23, Down to Nothing
Newer Posts Older Posts Home
Subscribe to: Posts (Atom)